Think back to 1996…… The internet was in its infancy and no one had yet fully tapped the true potential in the area of internet commerce. Netscape, anyone remember them?, was the dominant player in internet browsers. They spun off multiple firms that hoped to capitalize on the internet – from hosting solutions to content creation. Digital cameras were archaic and the size of a shoe box if you could afford one – think about cell phones or portable computers as a comparison for how they developed. Going from big and expensive to small and cheap in a span of ten years or less. Hard to believe but in 1996 the wave known as the internet had not yet started to crest, but all the signs were there. Internet commerce was just a glimmer in various enterprenuers minds and how to truly capitalize in this area was also on a scale of small to large – the individual with some HTML skills all the way up to those implementing grand shopping schemes. Some were spectacular failures – does anyone remember Webvan?

Now think back to 1996 as the year after the Raiders had returned from Los Angeles. Oakland Raider fans from the days of Kenny Stabler, Freddie Biletnikoff, Dave Casper, etc. were riding a surge of adrenaline from their beloved team returning to where they should never have left. I happened to be one of those “old” Raider fans who looked to rekindle the glory of the Oakland Raiders but little did I know that I was about to catch the wave of the internet at just the right moment in time.  A time when fan pages were popping up anytime a fan wanted to post pictures or comments regarding the team. The majority of the sites at that time were primarily sites designed to talk about the team, the games, and trash talk with the other fans. No one had a concrete vision to combine the fan page with a concept such as Raider Nation – it did not exist.  The plethora of “Nation” sites you see now were all given birth by the success of Raider Nation. There would be no Red Sox Nation, Bachelor Nation, Niner Nation, etc. without the first website designed to capitalize on the internet and fanaticism – Raider Nation.

The official filing with the US Patent and Trademark office:

Many have come forward after the success of Raider Nation claiming to be the originators but none have the conclusive documentation being presented here to substantiate their claims. What I am presenting here is the history and origins that fueled the success of the concept known as Raider Nation. I will present the original graphics that were used to develop the Raider Nation website for which, of course, I owned the domain RaiderNation.com. Intertwined in the history will be the business lessons learned along the way.

I will take you on a journey that validated many things taught in business schools and the journey itself was an education in business that many never receive in an entire lifetime. Are you ready to rumble………..

Yes, believe it or not, there was a time I actually drove this car around town!! Obviously, years ago in a galaxy far away as the Pacific Bell reference makes clear – it was long ago. Not many people can say they were a big enough fan to do this on a daily basis. Gives new meaning to the phrase I bleed Silver and Black, or at one time I did. 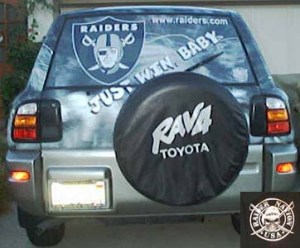 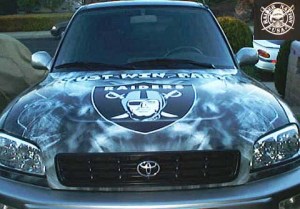 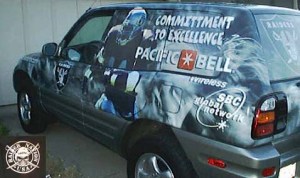 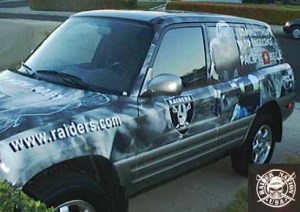 More pics from the archives of the Original Raider Nation………… 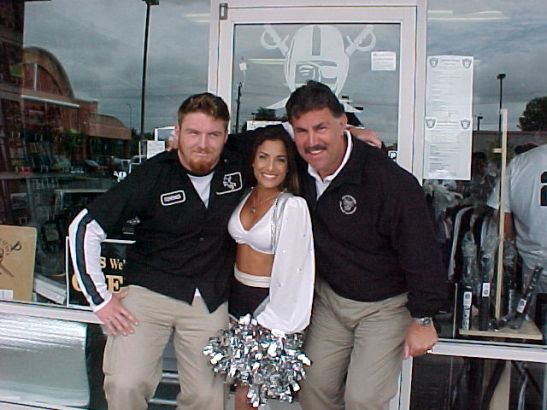 Autograph signing with Jon Ritchie at the Raider Locker Room. 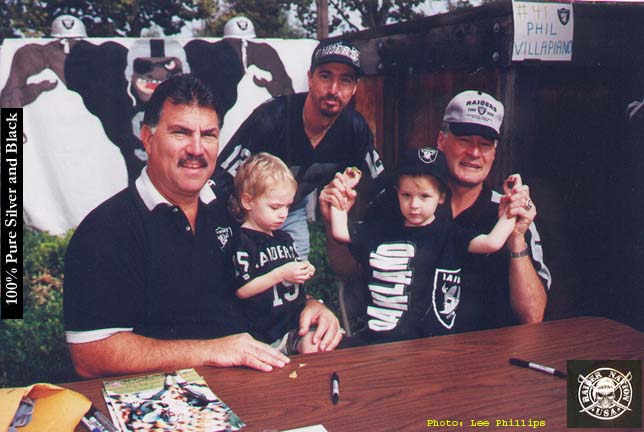 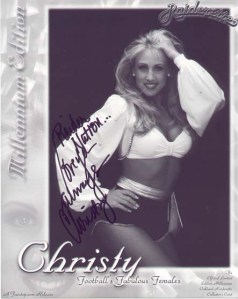 END_OF_DOCUMENT_TOKEN_TO_BE_REPLACED

Early on I scored several major coups by enlisting the aid of various Raiderettes to the cause of Raider Nation. This drove the competition bonkers as they were driven insane by the very real speed by which Raider Nation was becoming the acknowledged leader for Raider fans on the Internet, and beyond. First they lost the coveted Raider Locker Room outlet by which the image and name of Raider Nation could be advertised daily through a brick and mortar outlet. Then they lost the battle for the very hearts of Raider fans when the Raider Nation moniker started to appear on the backs of cheerleaders – WTF, this is adding insult to injury. It was a brilliant execution of strategy aimed at making the Raider Nation brand well known and adopted as a symbol of Raider fans worldwide.

END_OF_DOCUMENT_TOKEN_TO_BE_REPLACED 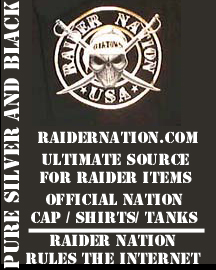 These are the original draft designs from initial concept to final design which made it as the official logo of Raider Nation.

I originally went to a t-shirt screen printer in Berkeley thinking where else would you go to get a far out wild design done the right way. Big mistake as it turns out they were good at concert graphics but simple sports designs were just not their thing.

From these drawings you can see the skull and bandana went through several iterations until it was done right. Once the design was finalized there was no doubt in my mind that it was going to be popular. The design incorporated all the base attributes which Raider fans identified with – skull and crossbones, being a team for the nation, and portraying the rogue mentality.

So, these original draft designs document the true origin of Raider Nation as this became the iconic symbol for the website and all merchandise associated with Raider Nation. 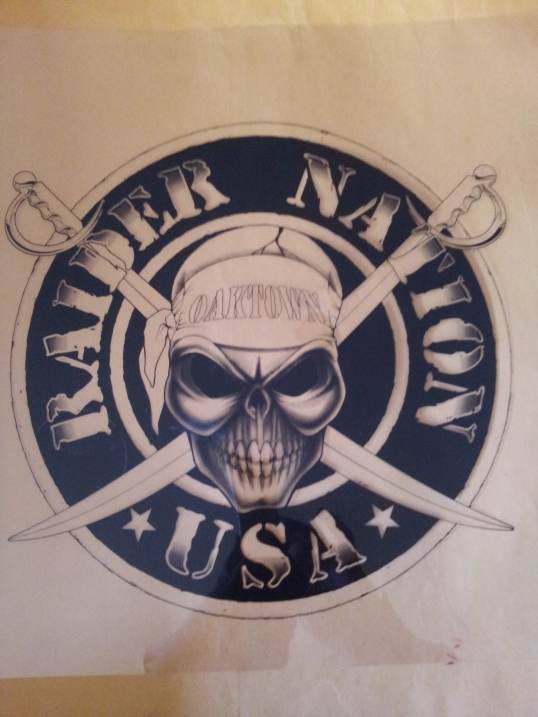 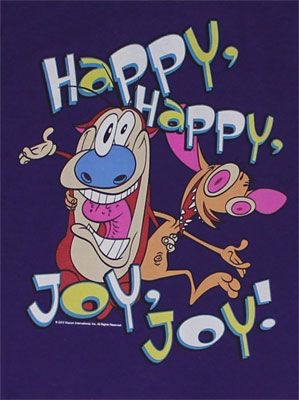 Senior manager at one firm would glide across the room and greet visitors as if she had known them all her life. Speaking platitudes of how glad they were to see the visitor and going over the top in expressions of love and happiness. Of course this belied the underlying contempt this person had for everyone and that all the happy, happy, joy, joy was just a facade she used to get what she wanted. Boy, but turn her down once she made this grand spectacle of opening her heart to you, regardless of how asinine whatever she was asking for, and you would see the immediate dark side.

She was the type of manager that had no regard for the true opinions of those who worked for her. What?, you thought my expressions of peace, love

, and happiness were real – then you are the real idiot in the room. All her expressions of love and caring were only intended to placate the emotional need of those she dealt with. If you did not know her then you accepted these offerings as genuine. Having dealt with this person day in and day out over a period of years I knew them for what they were – nothing but word vomit, diarrhea of the mouth, mutterings of a serial con artist, etc…

You might ask, why do so many managers in the workplace operate in such a manner? The simple answer is, unfortunately, that it works the majority of the time.

A manager such as this lacks substance but gets by on the happy, happy, joy, joy facade which allows them to build political brownie points. Of course, ignore the fact that these types are generally not the sharpest knives in the drawer, but that is exactly the point – they have become shrewd manipulators who divert your attention away from the fact they can’t walk and chew gum at the same time.

They are the Joker in the deck. Great to have around company parties and events as they have learned the art of saying a lot without really saying anything. Meaningless dribble which buys many many political points and kudos in organizations that put more value on “fitting into the culture” versus actually accomplishing something.

I actually believe in a much more direct and honest approach to communication. One in which there is nothing left to the imagination.

If you don’t like something, say so – I know this is a novel concept in an age where one must at all times mute what might be harmful to the social environment and the delicate souls that operate in it.

Lesson learned: happy happy joy joy is no substitute for proven experience and the ability to execute.

via About 5150 Business Strategy / Raider Nation

Tell me how we lost the $1.7 million settlement was the simple question that I asked over and over. The person stammered through several unintelligible answers but finally said the very fateful…….. “Because I Can”. Talk about the straw that broke the camels back!!! Finally, in those three words there was an admission that all the bad decisions and very questionable strategy boiled down to “Because I Can”. Really?

When it dawned on me that the investments made in this firm were subject to going poof because of this “Because I Can” philosophy it was time to head for the exit.

Time to cash in my chips and preserve what I could before the head pinhead pissed it away just because they could. Better to get out with what you could instead of sticking around waiting for the inevitable face plants that kept occurring.

There has been a continued brain drain from this firm as it becomes apparent to many others that the firms upper management lacks the ability to lead. It continues to have the self centered “Because I Can” mentality that has it on the Highway to Hell. Multiple lawsuits filed against the company with no end in sight. Correction, there is an end in sight – for the company as an ongoing entity.

Lesson learned: don’t wait until your investment in a firm goes to zero when it becomes apparent that you have placed your money on a losing proposition. Use the “Because I Can” philosophy to your benefit!! I left, Because I can…….