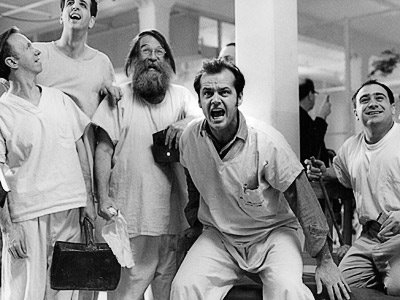 Ever feel like the inmates were running the insane asylum? I sure have. Sometimes I wonder how American business, and society in general, survives with the lunatic fringe I have witnessed running some corporations.

The amazing thing is that you are treated like Jack Nicholson’s character – the crazy one for not going along with the insanity. The ultimate Catch-22, if you don’t go with the flow then you are the dissident, or crazy one,  but if you go with the flow you become a participant in the insanity. Some corporations are caught in this cycle of dysfunctional behavior at the highest level but they call it “company culture”. What is even more insane is that some corporations wear the company culture badge with honor, as in “this is part of our long and illustrious history”. It is akin to bragging about being an alcoholic for the last 20 years. What, you don’t think an alcoholic is proud of their drinking prowess and ability to down a handle of vodka in one sitting? Why should a company be able to get away with bad behavour any more than an individual just because it is part of “their culture”?

For six months I did internal audits at a large architectural firm – see the post, “The Cobblers Children Have No Shoes” – to escape the insanity of the San Francisco Corporate office. Little did I know that the insanity, or culture as they would call it, was replicated in every office from California to New York. It was an amazing lesson in the power of upper managements ability to spread dysfunctional behavior to every corner of the company. Part of the internal audit was interviewing staff and management at every location on their views of the company – good and bad.

From staff the most common answers received were:

Then, from management interviews:

Not so surprisingly management at this firm was far out of touch with what the rank and file thought of the firm. In fact, when the findings were presented to the upper management the results were roundly dismissed. Reason being, we did not understand the company “culture” which had allowed this great firm to be successful. It was truly a case of the inmates running the insane asylum. This firms upper management still believes there is nothing wrong with the way the firm operates even though a majority of those who come into the firm have no intention of remaining any longer than they need to. A firm which survives on its past glory and thin veneer of respectability. The most despicable part of this firms culture was that it enforced a caste system which literally saw anyone below upper management as less worthy and deserving of their lower place in the food chain. For all the posturing about caring for the employee, at the end of the day the employees were the last thing on this firms agenda.

Those who do stay are little better than Moonies who adopt the mantra of management and become nothing more than automatons spitting back the propaganda that they realize guarantees their advancement in the firm. A highly political firm where being in favor with those who hold the reigns of power insures a clear shot up the ladder of ownership. Piss on the wrong parade and you might as well kiss off any chance for advancement. It was the first firm where I learned that no matter how good you are there are limitations to what can be done within a firm so constrained by its “culture”.

In a classic moment I was chastised for my “self promotion” by the prodigal son who went on to say that those who succeeded in the firm were team players, not self aggrandizing ladder climbers. Yeah, and a crack whore is not interested in their next fix but only in being a productive member of society. Another sign of how out of touch upper management was with what the true culture of the company was about. The prism through which upper

management saw the culture was distinctly tinted, and they fail to see how distorted the prism is. Like being caught in an episode of the Twilight Zone where what everyone on the outside would say is dysfunctional this firm saw as part of their culture.

From day one at this firm my main objective was to get out as soon as possible, the culture was that stifling. This firm also took pride in their “boomerangs”, employees who left the firm and then returned. The truth of the matter is that only mediocre talent would return to a firm like this as anyone else with a modicum of self worth ends up escaping. There is not a chance in hell that this firm will ever count me as a boomerang!!

Lesson Learned: beware of a firm which stands behind “company culture” as a justification for dysfunctional policies and procedures